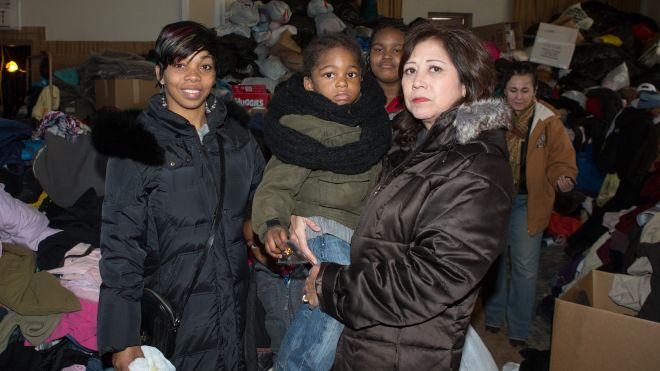 Immigrant day laborers working on the cleanup after Hurricane Sandy in Staten Island’s Port Richmond took a brief break Thursday to receive U.S. Labor Secretary Hilda Solis. She said the federal government is concerned about their safety and urged them to report hazardous conditions and missed wages.

“We want to know where there are problems so we can find solutions,” said Solis. “Don’t be afraid to call us. Everything is confidential, and we are here to protect.”

The purpose of the visit, on which Solis toured the devastated area wearing jeans and sport shoes, was to avoid mistakes made during the aftermath of Hurricane Katrina. Back in 2005, when the destructive storm struck Louisiana and other southern states, immigrants, many of them undocumented, performed much of the dirtiest cleanup for little pay and with inadequate protective gear.

Inherent hazards include downed electrical wires, carbon monoxide and electrical hazards from portable generators, falls and “struck-by” hazards from tree trimming or working at heights, being caught in unprotected excavations or confined spaces, burns, cuts, being struck by heavy equipment, and drowning from being caught in moving water or while removing water from flooded structures.

Superstorm Sandy packed a bigger economic punch than most people had thought.

In its sweep through the Northeast, the storm halted sales at major retailers at the start of the crucial holiday shopping season, closed factories and slowed home sales in one of the most densely populated areas of the country.

Sandy is being blamed for about $62 billion in damage and other losses in the U.S., most of it in New York and New Jersey. It’s the second-costliest storm in U.S. history after Hurricane Katrina, which caused $128 billion in damage in inflation-adjusted dollars.

Still, reports this week showed that the economic damage was confined mainly to the Northeast. In other parts of the country, the economy picked up in early November, when many New Yorkers were still without power.

With additional reporting by The Associated Press.