OSHA has lowered safety enforcement for those doing Hurricane Sandy recovery work, despite hazards such as asbestos.

Many worker advocates say that OSHA and the Obama administration are failing miserably on the biggest lesson of 9/11: the need to properly train workers on how to use respirators.
It’s been widely reported that in the post-9/11 rush to rescue victims and clear rubble, recovery workers’ health and safety were compromised. Under President Bush, the federal Occupational Safety and Health Administration (OSHA) relaxed enforcement of workplace safety rules during the clean-up. Many workers were not properly trained in how to use the respirators that are essential health safeguards for those handling toxic debris.


The result was disastrous: Thousands of ground zero workers needed treatment for respiratory illnesses, cancers and other health problems linked to their 9/11 clean-up work. 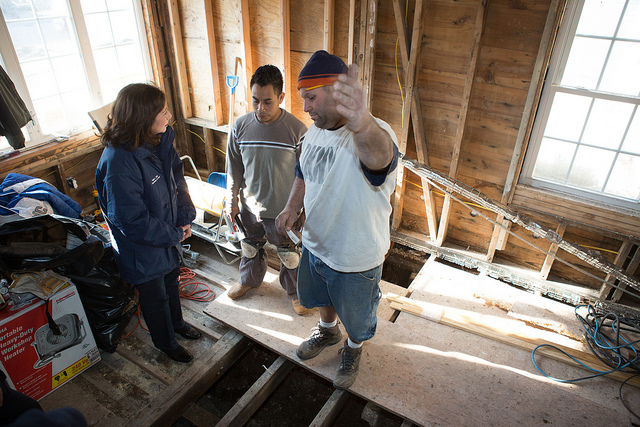 Now, in the recovery from Hurricane Sandy, In These Times has heard from unions, workplace safety activists and a former OSHA official that corporations and federal, state and local governments are repeating the mistakes of 9/11. Again, OSHA is operating in a reduced enforcement state known as “compliance assistance mode,” in which the agency warns employers about safety problems and helps with fixes instead of issuing citations.

“The general policies are almost exactly the same” as in the aftermath of 9/11, says Dave Newman, an industrial hygienist employed by New York Committee for Occupational Safety and Health (NYCOSH). Newman served on the Exposure Assessment Working Group of the World Trade Center Worker and Volunteer Medical Screening Program, which examined how to effectively treat 9/11 response workers.

According to multiple sources who spoke exclusively with In These Times, workers engaged in Sandy clean-up are being asked to go into areas with unknown hazards; not all workers are being provided with proper respirators; and workers who do have respirators are not trained in their use.

Sandy has left many buildings flooded with raw sewage and choked with asbestos, fiberglass and other harmful substances that broke loose during the storm. Yet first responders are often instructed to hurry into these disaster areas without checking for hazards, and to get things working as quickly as possible.

Newman believes this level of haste isn’t necessary. “This is not a rescue operation; we have the luxury of spending a little bit of extra time in doing it right. Even when trained firefighters rush into buildings, we don’t tell them to leave their personal protective equipment behind to make the rescue quicker. We want them to be as safe as possible. It’s the same thing here: We want cleanup workers to be as safe as possible.”

A first step, say workplace safety advocates, would be a comprehensive government assessment of the risks. “In terms of exposures, there isn’t really an agency that has been [in] charge of helping to characterize the hazards,” says CWA District 1 Occupational Safety and Health Director Micki Siegel de Hernandez, whose union represents sanitation workers and telecom workers involved in Sandy recovery. “The EPA has done very little on that. They have done some sampling of the Superfund sites.”

To its credit, OSHA has provided free N-95 respirators to workers involved in Sandy recovery. However, these respirators do not protect against asbestos, one of the major potential hazards at disaster sites. Moreover, many worker advocates say that OSHA and the Obama administration are failing miserably on the biggest lesson of 9/11: the need to properly train workers on how to use the respirators.

“I am not aware of any training at this point,” says NYCOSH’s Dave Newman. “Just getting a respirator and slapping it on your face doesn’t provide protection. You wouldn’t know how to position, to change it, to prevent a seal leak. If you aren’t using a respirator properly, it’s the equivalent of nothing.”

“Most of the workers we represent have not had training,” says CWA’s Siegel de Hernandez. “Verizon is not requiring people to wear respirators, so therefore they are not providing respirator training. It’s something that we are continuing to have conversations with the employer about.”

Hernandez feels Verizon has failed to protect its workers, many of whom are sent to fix telecom wires in basements that have been flooded with raw sewage or have had insulation and other hazardous building material knocked loose.

Health and safety advocates such as Newman and de Hernandez do note some improvements in the federal response since the Bush administration. They say OSHA has actively provided educational outreach to day laborers and other front-line workers who are at the highest risk of exposure. On Thursday, Department of Labor Secretary Hilda L. Solis visited the El Centro worker center in New York City to talk about clean-up safety.

In an interview with In These Times, Jordan Barab, Deputy Assistant Secretary of Labor for OSHA, defended the agency’s response. “From the moment the hurricane hit, we basically saw the need right away,” she says. “We immediately sat down with community and faith-based groups, especially the most vulnerable. We have done over a thousand outreach contacts. We did a big media blitz.”

Barab notes that OSHA sent an extra 20 compliance officers to the regions affected by Sandy, bringing the total number of inspectors there to 50.

“In terms of the lessons, educations, and enforcement, I think we have come an enormous[ly] long way since 9/11,” he continues. “We have leadership there that knows how to respond to this kind of stuff and works with vulnerable workers. This is a major concern of the whole Labor Department. Secretary Solis is very interested in what is going on here; we brief her every day. We have tried to put workplace safety and health upfront. The day laborers are our real focus and concern.”

While many health and safety advocates agree that OSHA has tried to do a good job with its limited resources, they say it’s not nearly enough for the scale of the problem. “The fact that they did learn lessons from the spectacular failure around 9/11 doesn’t mean they are able to alleviate or implement those measures,” says Newman.

One of the biggest factors hindering OSHA’s response is its relatively small size. The agency’s annual budget is only about $500 million (in contrast, the Environment Protection Agency has a budget of nearly $9 billion). Many advocates say having only 50 OSHA inspection officers in the hurricane-ravaged Northeast is still vastly inadequate.

Another constraint on OSHA is that it must coordinate its disaster response with a number of federal agencies—the EPA, the Department of Defense, and state and local governments—all overseen by FEMA. “We have had great concerns and difficulties over the years in dealing with FEMA,” says AFL-CIO Health and Safety Director Peg Seminario. “I think OSHA has been doing a really good job. Unfortunately, worker safety and health does not have a seat at the table when it comes to disaster response.”

Newman argues that the federal government could be mobilizing more resources to protect workers, noting that the National Institute for Occupational Safety and Health (NIOSH) could provide respirator training for free. In an email to In These Times, NIOSH spokesperson Nura Sadeghpour confirmed that “NIOSH has not been requested to provide training on respirators.”

In response, OSHA spokesperson Jesse Lawder told In These Times, “[National Day Labor Organizing Network] and some other folks have requested OSHA do trainings and they have when needed.”

One of the most startling political lessons that OSHA seems to have failed to learn is not to relax enforcement rules. OSHA is currently working in “compliance assistance” mode, says Deputy Assistant Secretary of Labor Jordan Barab. “In the immediate impacted area, we [first] go in and give them information [about safety laws]. If we keep coming back and they won’t do what we request them to do, we will initiate enforcement activities,” he explains. Several employers involved in Sandy cleanup have been cited for violations, but only after being “recalcitrant” in the face of several warnings.

This approach of limited inspections doesn’t please Celeste Monforton, an OSHA official during the Clinton Administration who now teaches at George Washington University.

“Most employers would love an OSHA that says, ‘The first few times we see [a problem], we will just give you a warning—if you don’t take actions to correct it and we find it again, we will issue a citation,’” says Monforton. “It’s an employer’s dream. It’s what anti-regulatory forces and people who want to ‘reform‘ OSHA have wanted for a long time.”

Barab disagrees. “We need to get information out there. If we have to do enforcement we will do it. [But] when we do enforcement it’s a lot of paperwork, a lot of time before we issue citations. In emergency situations like this, we realize it’s not the most efficient way to work.”

Governor Andrew Cuomo has announced that he is going to hire 5,000 out-of-work New York residents affected by Sandy to do clean-up work. But health and safety experts are concerned these workers won’t be properly trained or follow safety laws designed to protect them. Over a three-day period of correspondence with In These Times regarding these clean-up workers, the NY State Commissioner of Labor office failed to respond to questions about what type of training they planned to provide.

“Right now we have groups of workers who have been unemployed or underemployed, who are really eager to work hard and who aren’t going to call OSHA,” says Monforton. “You have the potential for a long-term disaster and nobody enforcing the law.”

Meanwhile, the health implications of the situation are serious; after 9/11, an estimated 1,000 people died from illnesses linked to the clean-up site.

According to NYCOSH’s Dave Newman, the risks for workers could translate to risks for residents. “The bigger issue here is that if we don’t identify hazards, it’s highly unlikely we are going to have an effective environmental cleanup,” he says.

“In that sense, the cleanup workers are the canaries in the coal mine for people occupying that space,” Newman explains. “It’s unlikely that the hazards to the occupants are being dealt with, either.”