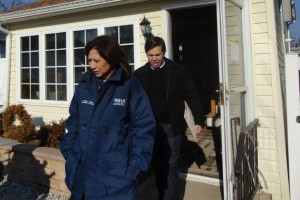 Secretary of Labor Hilda Solis visited a day worker center on Staten Island that has been involved in cleanup efforts after Sandy. She toured the Midland Beach neighborhood on Thursday.

Solis said the federal government is trying to reach different parts of the population to let them know about opportunities arising through recovery efforts following Sandy.

“The President … reiterated the importance and significance of us working on a broader scale to make sure that we really reach the vulnerable populations, that we really provide jobs,” she said. “This is an opportunity to help build back infrastructure, housing, and to help provide incentives for more economic development.”

Some day laborers who are undocumented immigrants and who have been doing cleanup used the opportunity to ask the Secretary if they’ll be eligible to apply for jobs and assistance funded by the government. Solis said that decision was not being made on the federal level.

“A lot of that will be determined by the state and they will determine what forms of eligibility will be necessary for them get employment for the cleanup,” she said. Those things are going to be handled at that level.”

An official with the New York State Department of Labor said undocumented immigrants don’t qualify for jobs funded through the 27 million dollar grant.

But Solis told day laborers that they can turn to the Department of Labor whether they’re in the country legally or not if their employers are not paying them properly or not providing safe conditions.

“We wanted to reassure people that we are doing the best that we can,” she said. “That we are accessible, that we want people to call us whether it’s for OSHA [the Occupational Safety and Health Administration] violations or inspections or compliance or training to help impart more information at the local level.”