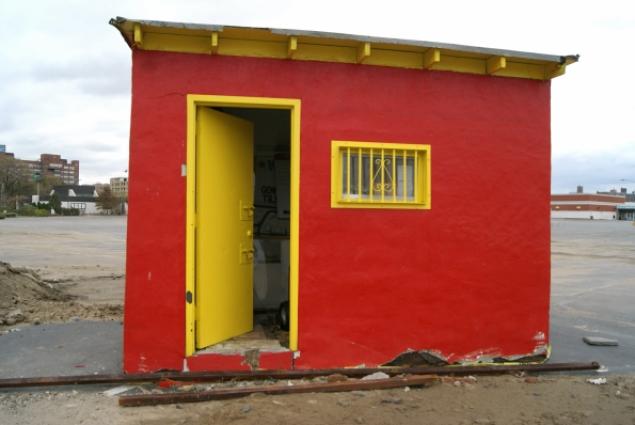 Workers Justice Project – The Bay Parkway Community Job Center was swept away and swamped with water during the storm.

After Hurricane Sandy destroyed their workers’ center and trashed the surrounding waterfront, Bensonhurst day laborers eager to do debris-clearing work say they can’t connect with contractors or homeowners.

“It’s really difficult,” said Gavino Hernandez, 46, who does construction and painting work. “Really, we’re desperate. We’re not sure what to do. No one helps us, they just tell us to move away from there. We have to think about rent.”

The entire area where Bay Parkway meets the water was closed off with police tape after the storm – so the workers can’t even get close to the place where employers usually find them each morning.

For more than a decade,the Bay Parkway Community Job Center – first a tent, then a small red-and-yellow heated structure – has been a spot where construction and landscaping employers who pledge to pay day rates of at least $120 and provide safety gear can hire workers.

Because it keeps day laborers from waiting outside on 18th Ave. and 69th St. each morning, the center is popular with area businesses and Community Board 11.

“We don’t want to see them standing back out in residential areas or on commercial blocks,” said the board’s district manager, Marnee Elias-Pavia. “Hopefully the area will be able to be cleaned up and they’ll be able to go back. Their building kind of floated away.”

She said it appears that the storm caused structural damage to cement in the waterfront area, which is not a priority for the city to fix since it is far from any homes.

Workers Justice Project – Worker Filiberto Altamirano doesn’t want to give up on the center.

On the corner, jobs go to those who will take the lowest pay – so the 40 or so workers who use the center are reluctant to give up on it.

“Losing that space, it’s like starting all over again,” said Ligia Guallpa, who runs the center with the Workers Justice Project.

“We’re trying to keep track of employers’ calls, so we don’t lose them. It’s hurting all of our members economically. They will be forced to go back to the corners to wait with the rest.”